This card is made using papers and dies from Couture Creations - Le Petit Jardin collection.
The card size is A5 (21cm x 14.9cm), with the backing paper cut to 20.2cm x 14.1cm, which leaved a border around the edge of the backing paper of 4mm on each side. 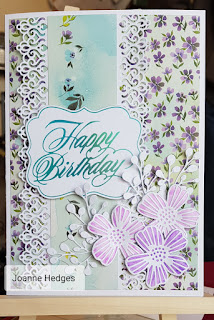 Cut a strip of white card to 10cm wide by 21 cm long. Place the Petit Floral Edge die along one of the long edges, so that one end is lined up with the end of the card strip and the cutting edge is along the long edge.  Tape it in place.  Position in your cutting plates so that the cut starts where the die is against the end of the card and stops before the other end of the die and run through your machine. 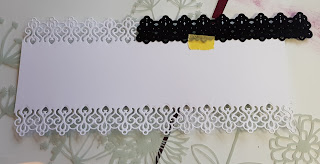 Then move the die along, carefully making the end of the previous die cut fit back into the die.  Tape it down and position in our plates so that you start cutting from the end where the die overhangs the end of the card and stops before the end of the die that overlaps the card that has already been die cut.  There are more details about doing this in the video. 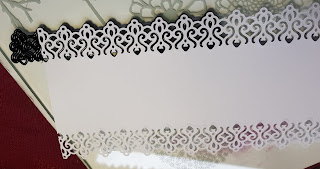 Cut a strip of the patterned paper to 21cm x 5cm, and stick in place on the lace edges panel so that it over hangs the top edge (where you started your die cuts) just a little, so that it can be trimmed with the lace panel to give a perfect edge. 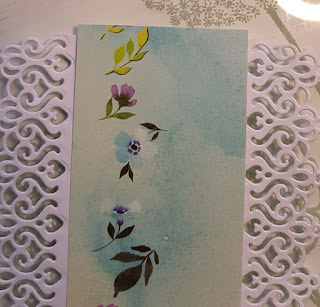 It doesn't matter that the strip of patterned paper doesn't quite reach the bottom of the card panel as it is going to be trimmed - but only after the panel has been stuck in place on the backing paper, as shown below. 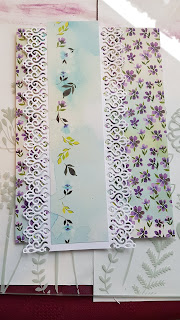 Now you can stick your backing paper, with the lace panel in place on your card blank.

Foil and cut the sentiment topper and mount on foam pads in the center of the lace panel.
Video 2 shows how to foil the sentiment and frame with one piece of foil, and get the words correctly aligned within the frame.  I used the Couture Creations Modern Essentials Cut, Foil and Emboss - Bracket Frames.

Don't forget to remove the die from your waste card before you tidy up. 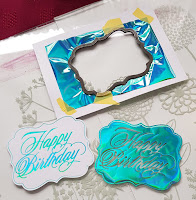 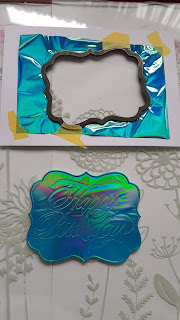 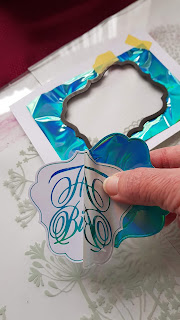 Die cut 3 flowers using the Morning Daisy mini die, and 4 of the Evening Branch from white card.
I used some stamping/water color card and water based marker pens to create the backing for my flowers, but you could use pigment stamping inks or Distress Inks applied with a blending tool or sponge, or use colored card instead.
Either scribble on a glass mat with a purple pen and pick up the color with a wet paintbrush or water brush and apply to your stamping card or draw some lines on the card and disperse the ink from the lines using a wet paintbrush or water brush - see how I do this in my video at the end of this post.
You need to make 3 colored pieces to back your die cut flowers. 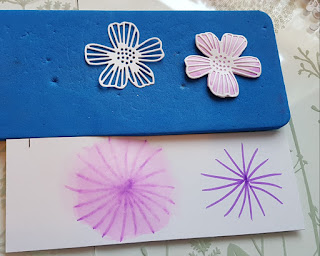 Stick each flower over a colored area using a wet craft glue, and cut around the edge of the die cut while the glue is still wet, then shape your flower from the back on a piece of foam using a large ball tool.  When you've shaped the petals, turn the flower over and use the ball tool to press down in the center of the flower.
Arrange the flowers and Evening Branch die cuts in the bottom right corner of the card. 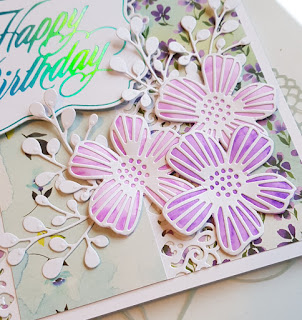