How to Make French Macarons

How to Make French Macarons

Seemingly both crispy and soft at the same time, these cookies have a nougat-like texture and can be filled with anything from buttercream to lemon curd. Oh so easy to eat— a little tricky to make. If you’re like me, macarons have been on your baking bucket list for a long time now. Though these cookies do require some patience and practice, they’re not at all impossible to make at home. With a little know-how and this easy-to-follow recipe, you can make a batch of macarons that will help take your next celebration from blah to “Ohh la la!” 1 - Preheat oven to 275°F. Prepare 2 baking sheets with parchment paper. Fit a 16 inch decorating bag with decorating tip 10.
2 - Sift powdered sugar and almond flour together, discarding any bits of almond flour that are too large to pass through the strainer.

3 - In a large bowl, beat egg whites, cream of tartar and salt on high speed until foamy. With the mixer running, gradually add in small amounts of granulated sugar at a time. Make sure your egg whites have been separated a day in advance to help avoid over-whipping. When the mixture reaches soft peaks, add vanilla and gel food colouring.

4 - Continue whipping just until the mixture forms stiff peaks. You’ve reached stiff peaks if you pull your beaters out of the bowl and the peaks remain upright.

5 - Gently and gradually pour the almond mixture over the whipped egg whites so they don’t deflate. Using a rubber spatula, fold the dry ingredients into wet ingredients in batches to avoid deflating the egg whites. Gently fold the almond flour mixture into the egg whites until the mixture holds a 10 count. How to measure a 10 count: When the batter falls from the spatula to the bowl it should take about 10 seconds until it fully blends back into the rest of the batter. This method helps ensure that the almond mixture is fully hydrated, while allowing egg whites to still retain some air.
The mixture should be thick enough to pipe without running everywhere, but thin enough for the peak of each piped cookie to fall on its own. The batter should appear to have a honey-like consistency. This takes about 45 turns, but depending on how aggressively you fold, it can be more or less.

6 - Transfer the macaron batter to the prepared decorating bag.
7 - Pipe 1 inch rounds of batter onto the parchment lined pans, spacing at least 1 inch apart. Use the macaron template under the parchment paper to help you create perfectly round macarons. If your macarons spread quickly once piped, your batter is likely too thin, caused by over mixing or under-whipped egg whites.

8 - Tap the baking sheet hard on the countertop 4-5 times to release air bubbles, avoiding cracked tops. Let the unbaked macarons sit at room temperature for 20 to 30 minutes or until the unbaked macarons form a skin. The skin should not stick to your finger when carefully touched. The skin creates the signature 'feet', which are the rings that arise at the base of each cookie during baking.
9 - Bake for 18 to 22 minutes on a shelf in the center of the oven. If baking 2 pans at a time on different oven racks, rotate the pans from bottom to top midway through baking. There isn’t a great visual on how long to bake macarons. When underbaked, the centres can be wet. When overbaked, they start to brown slightly and become very crunchy instead of crisp on the top with a softer interior.
10 - Place the macaron shells on a cooling grid to cool completely before sandwiching with your filling.
11 - Place a dollop of your filling on one macaron shell and top with another shell. Flavoured buttercream, jams, and chocolate ganache are all great options for macaron fillings. 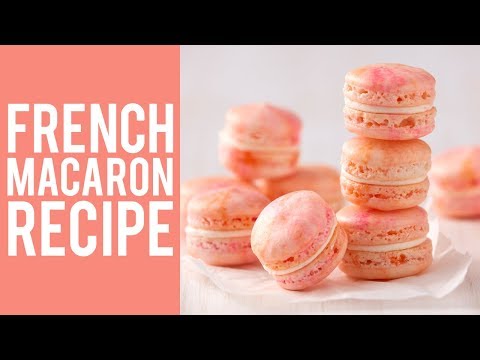